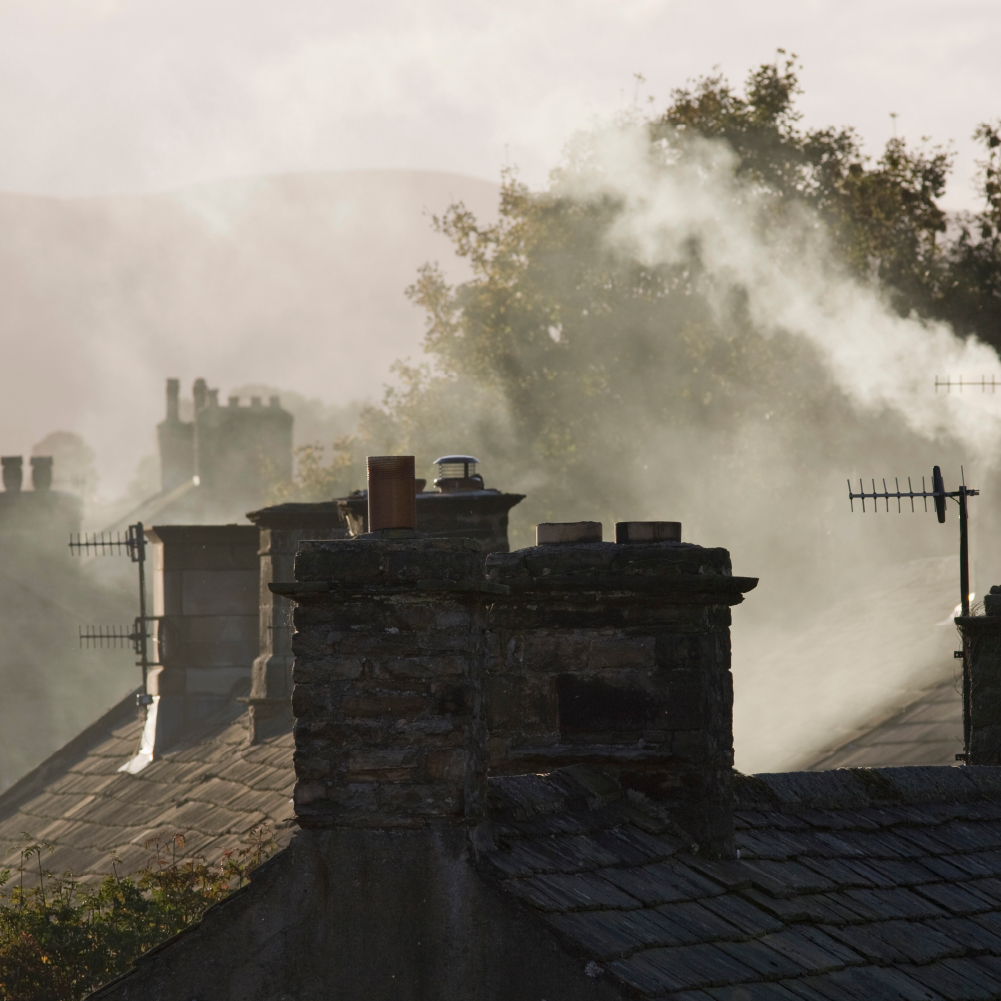 Fire, Smoke and a Cost-of-Living Crisis

Across the UK, roughly six in seven households use a gas boiler to heat their homes. For most of these households, this boiler has been resting easy since March, providing the odd bit of hot water here and there, but not much else.

Usually in October, the cold weather becomes noticeable – we dig out our winter jackets, our shorts slowly descend to the bottom of our draws, and most of us decide to turn back on our central heating. Since last winter however, the cost of gas has more than doubled meaning, for many of us, we simply cannot afford to heat our homes in the same way as we did.

Heat the Room, Not the House

Households across the country are looking for ways to limit their gas consumption whilst remaining warm. One method of reducing consumption is known as ‘zonal heating’ whereby households heat only the rooms that they are occupying, and not the whole property. Households with fireplaces or log burners have a readily available method for heating their homes in this way and it is anticipated that usage of this form of so called ‘secondary heating’ will increase this winter.

There’s No Smoke Without a Fire

So a big hurrah for the trusty hearth! Is that where this discussion begins and ends? Unfortunately not. Whilst the financial benefits to households are more welcome than ever, many are concerned with the impact of increased levels of air pollution that would occur as a result of greater domestic burning of wood and coal. The air pollutant of greatest concern is that of particulate matter (PM for short) – the microscopic soot particles that exist in smoke and make it dark. Organisations such as Asthma UK and British Lung Foundation express their concern over the burning of wood and coal domestically and the consequences that increased PM emissions may have on public health. With an annual morbidity of 28,000 – 36,000 attributable to human made air pollution in the UK, it is important to review all ways in which air pollution can be minimised.

In a piece of work commissioned by CPL, the UK’s largest supplier of solid fuels, we developed a piece of analysis which quantifies both the potential energy bill savings that secondary heating could have on households, as well as the air pollution impacts that occur as a result of burning solid fuels. One of the most insightful findings from this project was how dependent the levels of air pollution are on the various methods of secondary heating. Firstly, the choice of fuel matters. Burning wet wood can result in up to three to four times more particulate matter emissions compared with dry wood. Similarly, manufactured solid fuel products, normally produced through a blend of coal and biomass, can also greatly reduce levels of air pollution compared against traditional coal products. The government has already started to regulate fuel choice for domestic burning, banning the sale of coal and wet wood in May last year. This will undoubtedly have an immediate and significant impact on reducing levels of air pollution from domestic burning.

In addition to fuel choice, the type of stove technology used has a significant impact on emissions. The analysis developed details the air pollution impact of different stove technologies – namely conventional and ‘ecolabelled’ stoves. The more advanced ecolabelled stoves are capable of burning the fuel source more efficiently, with a more complete combustion of the fuel greatly minimising the amount of smoke that is produced. We calculated that the air pollution impact of ecolabelled stoves is over seven times lower than conventional stoves and open fireplaces. The annual impact of the air pollution has been measured using a ‘damage cost’. This describes the societal cost resulting from a defined quantity of air pollution, primarily attributable to the cost of the health impacts posed to the population. The graph below displays the output from this piece of analysis. 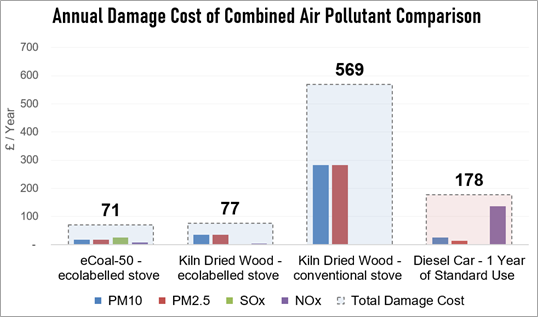 What More Can Be Done?

In conclusion, levels of air pollution from domestic burning could be greatly minimised by replacing conventional stoves and open fireplaces with more efficient and economical ecolabelled stoves. This logic is not completely original and has been implemented in France through a stove scrappage scheme, financing the replacement of over 600,000 wood burning stoves since 2015. With the installation cost of a new ecolabelled stove being in the order of £1,000, the societal damage cost savings resulting from the reduced levels of air pollution could justify this investment within just two years.

The cost-of-living crisis and the high cost of gas this winter will likely revitalise the intimate relationship between the household and the hearth as a trusted source of warmth. With a blanket ban of domestic burning appearing infeasible, it makes good sense for policy makers to look towards transitions to more environmentally friendly fuel types as well as efficient ecolabelled stoves.

Phasing out wet-wood and coal:

Read Bio
Previous
A New EU/US Framework, or a Path to Schrems III?
Next
Do I have to Respond to a SAR from a third party?
Manage Cookie Consent
This website uses cookies. Please choose which categories of cookies you would like to enable.
Manage options Manage services Manage vendors Read more about these purposes
View preferences
{title} {title} {title}